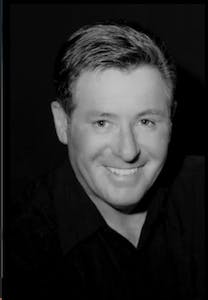 David comes to Palm Springs Celebrity Tours with a wealth of knowledge, experience, desire, commitment, drive, and integrity. “I first met David (Tim Bannister, owner Celebrity Tours) through phone conversations while he was Director of the Indio Performing Arts Center. He was easy to talk to, and from the first conversation I knew he was a man committed to the betterment of the community”

After taking an early retirement from a senior management position directing social care in London, Clinton-Reid moved with his wife, Esther, to Palm Springs. She had adult children from a previous marriage living in Los Angeles County, and they wanted to be a closer to them. That’s when Clinton-Reid found himself becoming progressively more involved in desert arts scene.

“Having arrived in the U.S., my goal was not to manage resources again,” said Clinton-Reid, who was born in the Republic of Ireland to parents heavily involved in theatre. “I needed something part-time in order to be stimulated. Coming from a theater background, I took a seasonal job promoting the Palm Springs Follies. This was great fun, and I was proud to be part of a quintessentially American organization.”

While at the Follies, Clinton-Reid was approached by the management and board of the Indio Performing Arts Center to promote their organization.

“It presented new challenges, and as it was a nonprofit with a strong connection to the community, I accepted,” he said. “That was early fall 2008 when the economy crashed. It became a very difficult time for the theater, and the future looked uncertain.”

In early 2009, the board of directors for IPAC decided on major changes to its organizational structure. Clinton-Reid was asked to take over the management.

“My experience of managing resources was very much in need,” he said. “Together with colleagues and board support, we were able to keep the doors open and provide quality entertainment for our culturally diverse community. I effectively worked voluntarily to ensure that the operational needs of the theater could be met.”

Clinton-Reid spent his childhood between Ireland and England. With his parents traveling extensively, he spent most of his youth in what he calls “an ancient boarding school in Gloucestershire.” He attended high school in London before moving on to York University, also attending college in Rome and at Westminster University in London, receiving a Master’s degree in public administration with qualifications in social work and psychotherapy.

David has a wealth of experience and brings this experience to the team at Celebrity Tours.