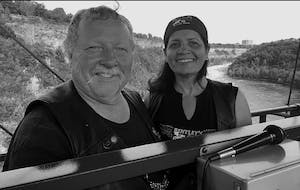 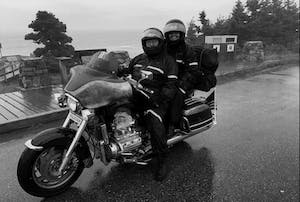 Tim married Celia De Almeida May 7 2016, who he met in 2010 at their local churches “Vacation Bible School” of all places. Their honeymoon (pictures on left) was a 12,484 mile trek on Tim’s 1999 Honda Valkyrie (known as “The Dragon”) motorcycle. From Ontario, CA to Washington DC with “Run For The Wall” veterans run, then on to Dominion, Cape Breton, Nova Scotia. From there to West Virginia, Niagara Falls, through Michigan’s U.P. to Washington State and back. “I have been blessed to have visited 49 states, and 4 Canadian provinces. I love to hear from our visitors, where they are from, and the experiences they share about their hometown.

Update 2017 – Traveled for a second year with “Run For The Wall” before heading south to Key West, around the Gulf of Mexico, through Texas, and back to Palm Springs. This year though Celia rode her own bike, a 2011 Can Am Spyder RT a total of just under 8,500 miles.